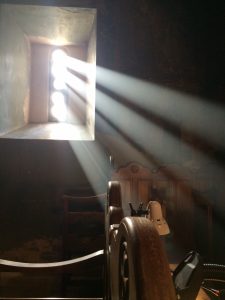 We live in a country in which Christianity became the state religion 1700 years ago in 319AD by a young woman named Nino!  She is buried in a small church on the grounds of an ancient monastery in the Eastern part of the country.  We recently visited and stood for some time in the small church.  It is overwhelming to see firsthand how a message of relationship, hope, life and light has morphed into what could be described as a heavy, duty-filled, dark religion.

As we stood there, sun beams came through the window into the dark church.  The vision of light piercing the darkness is so powerful, and we’re praying that this historically Christian nation would experience true revival!