May 9, 1945 Nazi Germany officially signed the document of surrender with representatives from the Soviet Union.  The people of, formerly part of the Soviet Union, suffered one of the greatest amount of casualties in World War II. Today we praise God for the victory the Allies had over the Axis and are reminded of the victory we recently celebrated on Easter that Christ had over death.  Pray with us for the people here to find true victory in Jesus Christ. 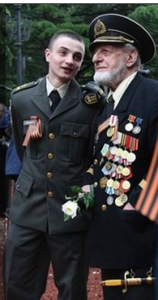 Pray for the leaders